I decided to build a robot arm for my 6.115 final project, which was a bad idea.  The project is open ended, but requires you to use an Intel 8051 and a Cypress PSoC microcontroller.  The 8051 is from the 1980's and is useless, and the PSoC is only there because Cypress gave MIT a ton of money.  The PSoC is honestly a very bad microcontroller - it's neither high performance nor cheap.  It's big feature is that there's some sort of vaguely FPGA-like thing that allows certain pins to be remapped.  As a result it does many things, but nothing well.  It is very slow at floating point math.  The analog inputs are slow.  It can literally do half the PWM and encoder decoding of the similarly priced ST micro.  It has no hardware serial support.  You can even turn some pins into a really bad op-amp!  Cypress gave MIT lots of money and development kits, so the class teaches you that your choices in microcontroller are old 8051's or Cypress PSoC, so of course, everybody leaves thinking the PSoC is the pinnacle of high-performance electronics.

The final projects are supposed to be very ambitious.  My original final project proposal included the following


and I was told "it wasn't enough" and "wasn't related to the class", even though we learned about motors, current control, first order circuits, feedback control, switching regulators, feedback control of switching regulators, stepper motors, digital signal processing, digital filters, and characterizing systems.  The suggestion was to add code that takes in a JPEG, vectorizes it, then draws the image.  On an Intel 8051. The idea is to get people to branch out, but I think it's setting people up to get super stressed and have a partially working final project.  I still managed to get all the points without doing anything more that what's listed above, but I didn't know this would happen until after I turned in the project.


This project was submitted as a "safe" robot arm with "small" electric motors, driven by "little 3 phase inverter ICs" powered from a "low-power" bench supply. There's a huge number of safety requirements for the project, which is pretty reasonable given some of the proposed ideas. The "safe" and "small" motors are around 1.5 kW motors from an electric hoverboard, the "little" IC is actually a 75A, 600V IGBT in a package that can dissipate 225W, and the "low-power bench supply" is, well, actually a completely reasonable 3A, 15V bench supply that we're required to use.

We were taught in class that using words like "low-power" or "large" were relative and meaningless in engineering, so I didn't feel bad about submitting something that could potentially be dangerous.

Bayley recently bought 15 hoverboards from a man in New York, and gave me a few motors to use for this project.  I started by removing the tire from the motors and disassembling. 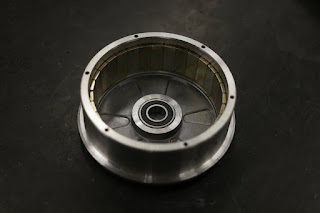 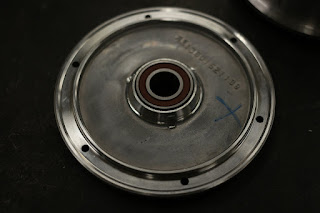 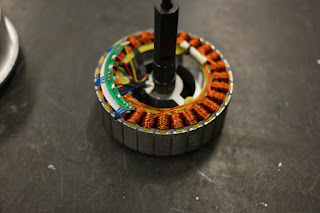 There's a lot of motor inside!  Unfortunately, I couldn't come up with a clever way to hide an encoder on the inside of the motor, so I bored a hole in the casing to give me access to the fixed shaft from the front of the motor.  There aren't very many circular features on this motor, so finding the center is challenging.  I ended up putting it in a four-jaw chuck on the lathe, but was only able to get within .001" because nothing on this thing is actually round. 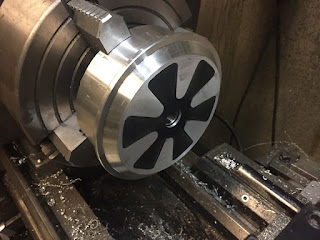 During the next week, I made all the brackets and clamps.  Some were made on the MITERS CNC 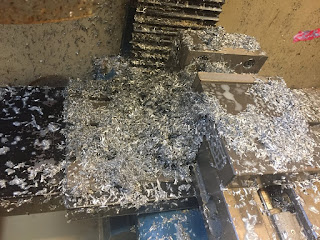 and other were made on the Haas VF-2 next door 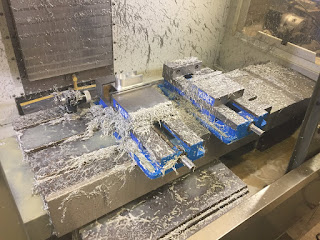 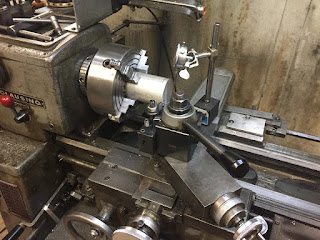 After a week of machining, I had bunch of shiny aluminum parts 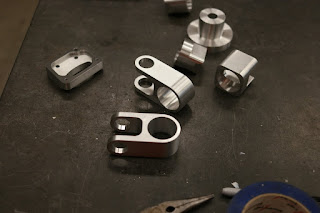 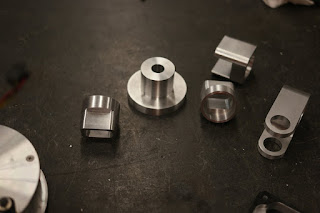 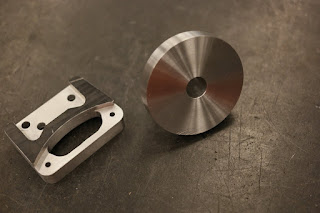 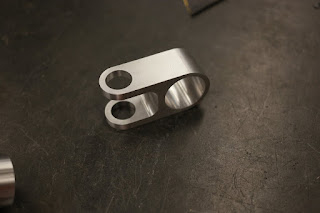 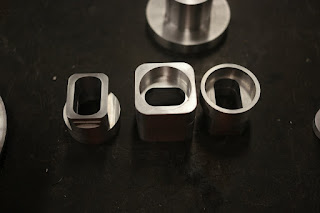 Next,  I found some thin wall tube laying around MITERS and assembled the two arms 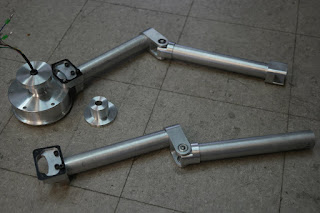 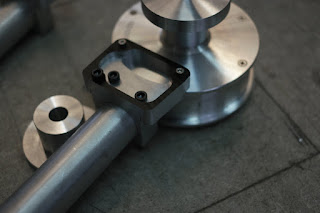 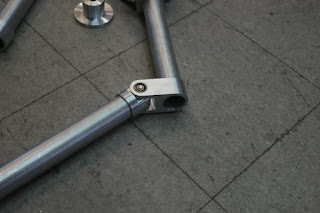 The controller for this arm is overkill.  The IGBT module (FNA27560) is good for 50A, 400V continuous with good heatsinking, so it's more of an electric vehicle controller than a robotics controller.  I created a schematic inspired by the reference design for the IGBT module and added a microcontroller and differential serial.  There are no power supplies on the board.  I'm not sure if this was a good decision or not, but I planned to put the 5V, 3.3V, 15V supplies on a separate board that connected to both boards.  Unfortunately, I wasn't allowed to use the ST microcontroller for the class project as the class was bought out by Cypress and forbids knowledge of other companies has received generous donations of money and parts from Cypress.  Instead I was forced to decided to take advantage of the Cypress Programmable System on a Chip 5LP microcontroller development platform, and created a controller that was in every way worse than the ST based controller was easy to implement with the Cypress "PSoC Creator" software (a 3GB IDE that vaguely resembles Office 2003).   For a class that's about "teaching design concepts more than a specific platform", it's suspicious to forbid investigation of other platforms that may have their own pros and cons... 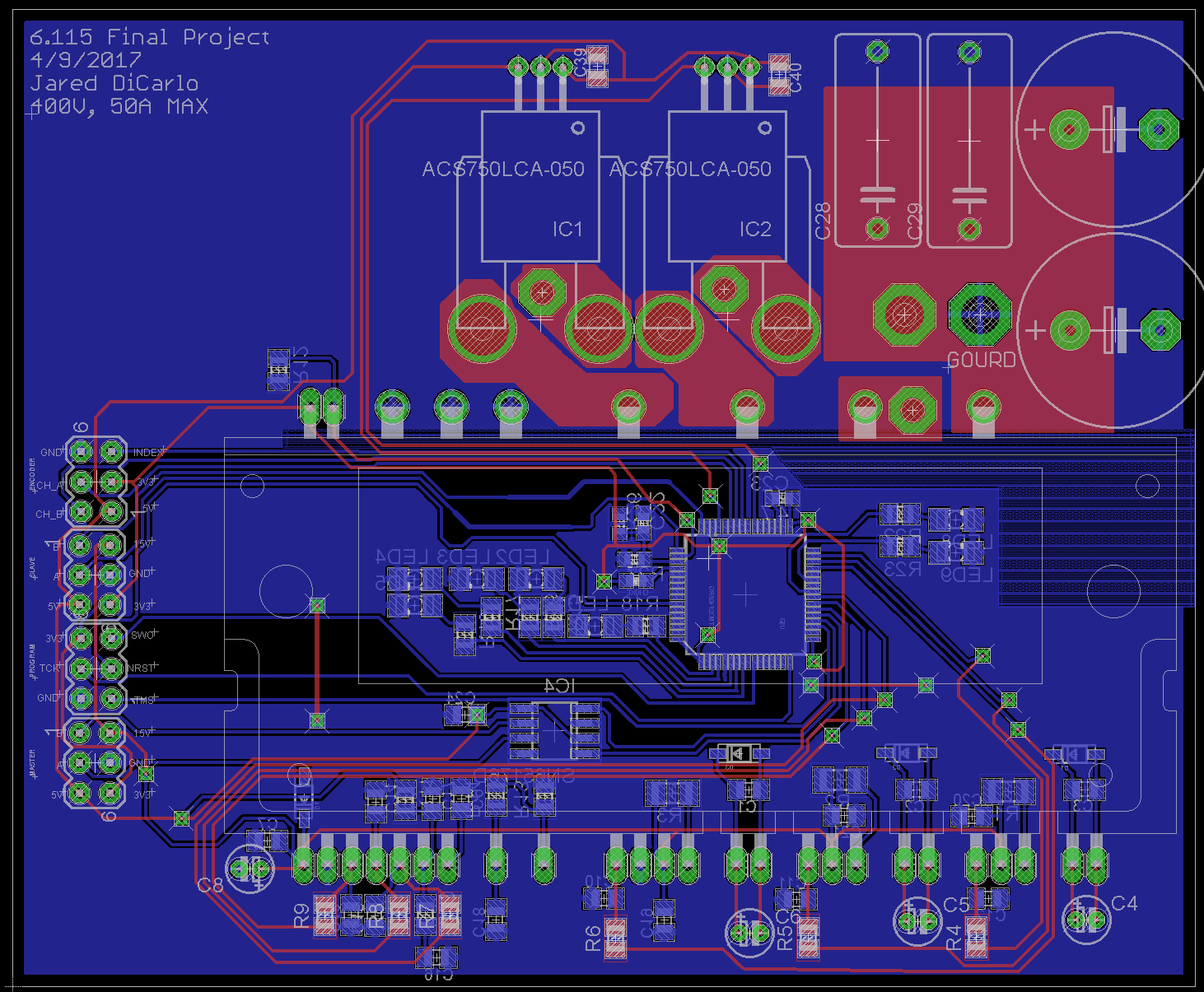 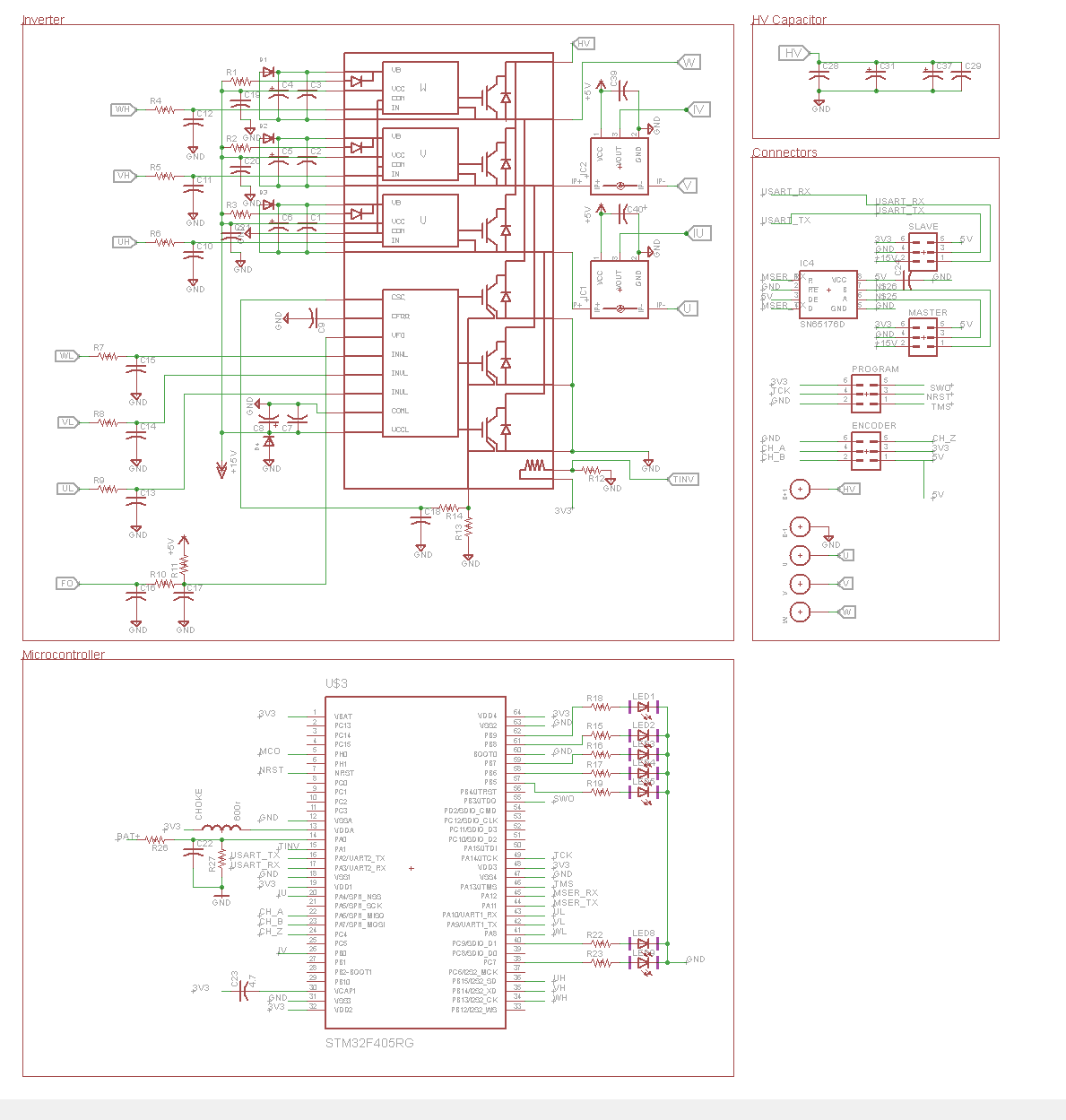 The board I drew up was a little bit scary - there's not much ground plane and the micro is directly under the IGBT. The reference design seemed incredibly conservative and only put components on the top layer, so I moved things around a bit to get a tighter layout.

Around 6 days after placing the order to 3-PCB, the boards arrived.  I somehow screwed up the gerber file generation so I missed mounting holes, heatsink holes, and my text.  Populating the board was uneventful.  I screwed up and bought a through hole diode instead of the correct surface mount one (not sure how I screwed up that bad) and the holes for the large IGBT module pins were slightly too small, requiring the pins to be filed down.

Fiddling with PSOC Creator to give me the center-aligned PWM with deadtime took an hour or so, which isn't too bad.  I ended up with my board in a state where the clock is set "too fast" for reliable programming, so it fails to erase flash one in four times, causing the whole PSOC Creator program to throw endless memory out of bounds errors until you restart it.   It's not a well written application.

Once I had control of the inverter with the PSOC, I fed open loop sinusoidal phase voltages into the motor:

Next, I got the DAC working.  The PSOC has no easy to use print statements for debugging (piece of junk), so the DAC is the main debugging output.  If I add debugging serial, I need to provide my own USB to serial adapter, and I use a ton of CPU power to implement the software serial, which prevented the FOC loop from running fast enough.  Once I configured the quadrature encoder "block", I wrote a little automatic calibration routine.    The motor spins open loop until it hits an index pulse.  To figure out the electrical offset, it raises one phase high and leaves the other two low, causing the motor to lock at the d axis.  From here, the microcontroller calculates the electrical offset and applies q axis volts, causing the motor to speed up.  Here's a video (don't forget your safety tupperware when doing class projects):

I wrote some other stuff with some nice pictures, but google blogger is terrible and messed up the formatting, so I got frustrated and copied everything into a video.  Watch as I slowly lose interest in the project and things get crappier and crappier.  The robot arm gets clamped to an old cart and the electronics get really bad.


In the end, after failing at least 3 different safety inspections, I finally added  a bunch of clamps and polycard shields, hid it in the corner of the lab underneath unused benches, and passed the final safety inspection the day before checkoff.  I demoed it slowly moving in a circle to a TA for 3 seconds and got an A.

In the future, I plan to come back to this project and make it less terrible, with better encoders and motor control.