PMTH began some time early in December, when Alex and I decided we should try to build a battlebot.  We didn't really know what we were doing, and the project turned out to be mostly a failure, but it was a great introduction to battlebots.  We began with some ideas and material.


At first, we were planning on building some sort of automatic flywheel powered flipper, but we would later scrap the idea due to complexity and lack of space/time.  We used many parts from Alex's class project, which was supposed to be a speaker, but actually was a battlebot drivetrain in disguise.

Almost all of the material shown came from the Stata loading dock.  On December 8th, I found some sort of giant old industrial motor controller with some large heatsinks.  As far as I can tell, they were machined from solid 6061 aluminum.

After lots of CAD, we decided we'd have more fun if we designed the robot as we made it, so we threw our designs in the trash and got to work making parts.

On January 21st, we went to MITERS to begin construction of the robot. We clamped the heatsink to the table of the Bridgeport, and removed the fins.
The next day, we made some motor mounts.  They have little slots milled in them to fit around the plastic gearbox housing.  We also made shafts from the really awesome 1/2" 7075 Hex shaft from Vex Pro.
After that, we made bearing blocks for the wheels that weren't driven by the motors.  I started by making a rectangle
then bored a hole for two bearings.

I goofed and didn't get a good press fit, so I added some bearing retaining screws.

The next step was to cut up the heatsink plate and put holes in it.

We ordered sprockets from Vex Pro, which were received by a man(?) named MICHEEEL 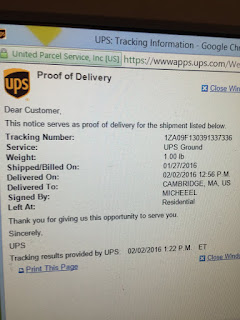 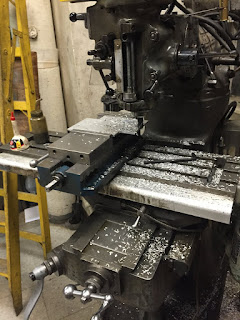 The plates also needed to be modified to let the chuck of the drill fit.

Our next challenge was to create the weapon drive.  We looked in the large bearing drawer at MITERS and found some gross looking bearings that seemed suitable.  At first, we couldn't even get the bearings to turn, but we were able to get them rolling after a bath in acetone.


Finding a suitable shell was difficult too.  All the woks were flimsy, so we went with a really small cast iron skillet.  Unfortunately, it is very small, so getting everything to fit will be a real challenge.

To drive the weapon, we are using an NTM Prop Drive 50-60 380KV motor with a bored out skateboard wheel.
At first, we didn't support the shaft, but we later created a little block that held everybody's favorite 8mm ID 22mm OD skateboard bearing.

To make an axle for the weapon, we used a 304 stainless steel pressure vessel we found at the loading dock.  304 is not one of the free machining stainless steels, and part temperature quickly became an issue on the MITERS lathe.
I finished the axle on one of the lathes in the FSAE shop that has flood coolant and a more powerful spindle. They currently use only one type of insert, which is terrible for stainless, so I dug through the collection of damaged/used up inserts and found something good for stainless. Running flood coolant, I could get around .100" off the diameter in each pass.  This was the limit for this lathe - any more and the servo drives would give errors.

I put a 3.25" diameter bolt circle in the skillet by clamping it to the table of the Bridgeport.

We needed a way to attach bearings to the pan, so I made a set of bearing blocks.  Looking back, these are probably the two best parts made in this project, and I'll likely find some better use for them in the future.  The first operation was to bring the stock to size


I started to create the bearing bore using the boring head on the mill, but this was too slow, so I switched to the lathe.

On the final night before leaving, everything was very rushed.  We added an idler wheel for the shell,


added some holes in the plate for mounting the weapon shaft,
made a pocket in the bottom of the weapon shaft (I don't remember why the larger pocket is there, but the bigger one is to hold the nut from turning),

and finally put the whole frame together! 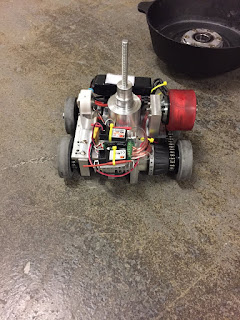 We tested it:
and brought it to Motorama, where we tested it again:

Unfortunately, PMTH was a terrible failure of a battlebot, losing both of its matches at Motorama.  The drive system was absolutely terrible and the center of gravity was too high, making the robot difficult to control.  It would also destabilize and dip into the ground, causing it to tip over and roll around.  The 'shell' was made of cast iron, which cracked and chipped with every impact.  Currently, I don't plan to build another robot for the next Motorama, but there's always the chance that Alex and I will be inspired for the next Motorama and we'll build another.
Posted by Jared at 8:37 PM No comments: